So why should you care about this and how does it impact you?

The short answer to this question is that most generator manufacturers follow this standard and the generators in the marketplace today have their applications, ratings, and performance defined by it.

So, to ensure that you are purchasing the best generator for your application, you must understand how ISO-8528 defines generator ratings!

This basic level of understanding could end up saving you some money!

These power ratings are further defined by three Rating Criteria:

These ratings and criteria are further defined in the tables and examples below.

The first rating criteria is the expected number of hours that a generator will run in a year. This is easiest to illustrate in table format.

The second rating criteria, Load Variability, looks at the load that the generator will be powering. This is defined as either constant or variable.

Basically, a constant load is a load that does not change over long periods of time as illustrated in the diagram below. 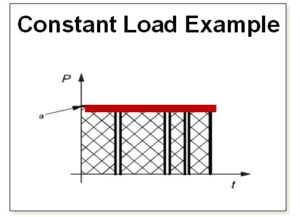 A variable load is one that fluctuates over a period of time as shown in the diagram below. 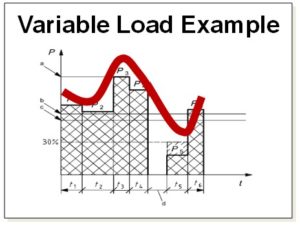 The four Power Ratings are further defined by the load variability as shown in the table below:

The third rating criteria, Load Factor, determines the expected average load on a generator over any 24-hour operating period. Its definition is best shown using the following example of a 1000kW standby unit: 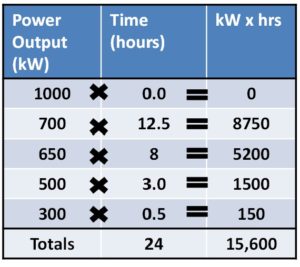 Putting this into the table format, the four Power Ratings are further defined by the Load Factor as follows:

Basically then, what the ISO-8528-1 standard is defining is that:

So why should you care about all of this?

Well, if you are purchasing a generator and some manufacturers can meet the minimum ISO-8528-1 standard with a lower power range generator, you may be able to save money.

With all things being equal, an 800kW unit in this example would have an average load factor of 81%. If your ESP generator were rated at 85%, you could purchase the 800kW rather than the 1000kW.

Take some time to review your generator requirements and the generator specifications before you buy your next generator. Keep in mind that the ISO requirements described in this article are just a few of many factors that need to be considered when you are specifying and purchasing the proper unit.

Also, beware of generator manufacturers that have created their own rating systems that are not ISO recognized. This can create a lot of confusion when you are trying to find the best solution for your application!

If you need assistance with the proper sizing of your power generation equipment give us a call and we would be happy to assist you!

Finally, take a look at this related post for more generator purchasing information: